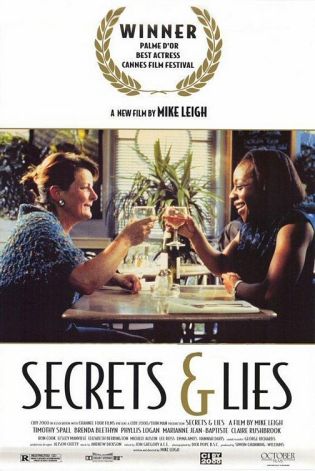 I watched 4 films this weekend. There was a bit of down time between college projects so I said to myself why not? The others were fine but the pick of the bunch was a Mike Leigh film from 1996.

I am ashamed to say this is probably only the fourth film of his I have seen. Leigh deals in upscale realism, mild class warfare and the general malaise of Great Britain. If you are looking to chew popcorn for a few hours probably best to avoid his work.

Anyway, we pick up the ‘action‘ at a funeral. A young black woman sheds a tear as the procession goes by. This is Hortense and she is mourning the death of her step-mother. We soon learn Hortense has decided to find out who her biological parents are.

Maurice is a local portrait photographer. He takes pictures of anything from people and their dogs to family portraits with reluctant dads. He has a friendly demeanor that puts his models at ease. Life is good professionally. At home he struggles along, trying to stay on the right side of his uptight wife Monica. They talk about inane things like sitting room furnishings, as  Monica seemingly attempts to distract herself from a life of non-motherhood. We also learn this might be because Maurice doesn’t want to give his wife the opportunity to belittle his family.

His family, being his older sister Cynthia(Blethyn) and her daughter Roxanne.

And that’s as much as I’ll say plotwise. It’s not world domination but it’s definitely a domination of some sort. The tension comes from over-familiarity, people disappointed with themselves and those around them. The majority of the characters are in their mid-forties and coming to the conclusion that what they have now will most likely not improve ’til the end of their days.

Clip from Secrets and Lies

Hortense changes all that.

Watching this slow paced European style is not everyone’s cup of tea. It is totally at odds with what Mark Cousins once described as closed romantic realism. When people slam doors and run away, you really wonder if they’ll come back. Leigh has made even less optimistic films than this mind you. If anything it is quite uplifting at times.

The key strengths are this work are not technical. The cinematography and lighting are adequate but unchallenging, the score non-invasive. Simply put it’s the Brenda Blethyn show, with strong support from the ever able Timothy Spall. Everyone else is very good but these two are different class.

It’s not a showy, scenery-chewing performance from Blethyn either. She is in excellent form not only in isolation but with all her co-stars. Her scenes with Hortense are a clinic in ‘give and take’. It is so difficult to make these things look so natural and unstaged. Likewise, the verbal sparring with Roxanne is brilliant too. Those almost cringe worthy moments when you know a mother simply needs to get her speak in, no matter who it might upset.

Cynthia spends most of the film a quivering wreck and yet she remains a matriarch of some power. It is maybe Leigh’s message here, as so often in his work; that perhaps there is no meaning in life until you go and create it or at least improve upon it. In Cynthia’s case it’s by giving birth, with Maurice it’s by bringing happiness.

I would give this four very nice 1990s wallpaper patterns out of five.

Take a look at these!