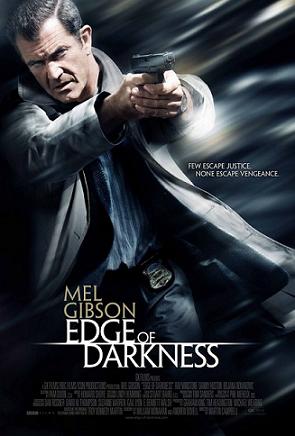 I always approach remakes of iconic TV series’ with caution. Even the likes of Tinker Tailor Soldier Spy, as good as the film was, had to make a lot of concessions to suit the film format. Here with Edge of Darkness, the challenge of conveying the tension and drama of the central character’s quest for his daughter’s justice has to be condensed. Does it work? Well, we’ll get to that.

I suppose the big question at the time was the casting of that central character. After a few false starts and scheduling conflicts, it fell into the lap of Mel Gibson. Even the most occasional of film fans will appreciate that Gibson’s stock isn’t what it was. Unlike many of his peers who simply succumbed to old age, Mel expedited his downfall with an arrest for spousal abuse and subsequent controversy over his thoughts on the Jewish community. For director Martin Campbell, this was a big risk.

Aside from that, how does Gibson fair? I never thought of him as one of the all-time greats. His early promise shown in the likes of Gallipoli, The Year of Living Dangerously and even to a certain extent the first Lethal Weapon film was, during the 1990s gradually watered down to a collection of facial gestures and grandstanding. The subtle was all but gone.

In this film, he is faced with the challenge of fitting an enormous amount of backstory into the first twenty-five minutes of the film. Those who remember the television series will recall how well this played out over the episodes, as Tom Craven’s daughter offers him helpful clues and inspiration in his quest. In both series and film, Craven is an experienced policeman. However while in the original, we have a determined but grounded Yorkshire bobby, this time around the action has been moved to Boston.

Whether this was to serve the plot or a device to provide the script with a typical stock macho American protagonist, for me, it just about gets away with it. Gibson is a believable senior policeman, with a respectable gravelly Mass accent. Unfortunately neither Gibson or any other actor could convey what needs to be conveyed here so we are often treated to default Gibson; quick-witted verbal put downs, nerveless accuracy with a weapon and of course silly, ‘he’s almost dead but not quite’ walks.

Really the performance is intertwined with a story that has far too much ground to cover in a short space of time. Ray Winstone also shows up early enough in the proceedings as a high level fixer. How an Englishman has risen to the ranks of American national security to reach this vaunted position is anyone’s guess but he likes cigars and expensive brandy so maybe that’s enough. In any case, he decides to channel F Scott Fitzgerald and do nothing for a while, until he decides who’s in the right. It’s not an ideal character to have in an already very busy story.

Danny Huston plays the evil megalomaniac would be nuclear arms dealer who happily flouts the laws of megalomania by wantonly looking for trouble and bringing far too much to his own front door. It is a bizarrely written character.

As well as these issues, there is, of course, the change in setting and time. While easy comparisons can be made between the unpopularity of American nuclear policy and Thatcher’s new Britain of the 1980s, there is little here to persuade me that the new location for this story is any better.

For all that however I didn’t hate it. I was reasonably engaged and it was good to see Gibson and his shtick do its thing for a few hours. There is a sense of him second guessing himself at times but that might be just me.

Martin Campbell, who also directed the original series and is in held in very high regard by 007 fans, never seems to get the credit due to him. Here he makes the best of the situation by pushing things along at a steady pace. I imagine that there would have been a great deal of mutual respect between both him and Gibson, himself an indisputably successful director.

But if all the film does is to remind or inform audiences of the excellent original BBC series then it just about justifies its existence.