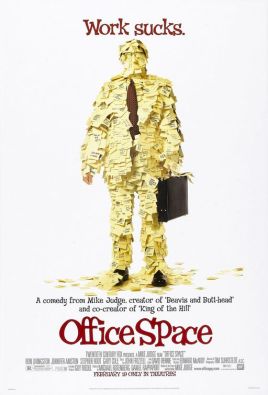 It’s funny how some films pass you by. It’s much more difficult to miss things these days with media coming at you from multiple angles. Or maybe that’s the problem.

Office Space will be familiar to a generation of meme enthusiasts, perhaps more so than the film itself. Its chief protagonist in these images is the hateful, malignant Porsche driving boss Bill Lumbergh( played by Gary Cole). A character as despicable as Willy Wonka was disinterested.

The film sees Peter, a twenty-something American male whose employment involves fixing the potential Y2K issues that might affect the accounts which are all computer based at this point. His main concerns are forgetting to put new cover sheets on his documents, wondering if his girlfriend is cheating on him and trying to pick the right lane on the freeway while commuting to work.

His colleagues, Samir and Michael Bolton(just coincidence) are slightly more technically minded on the I.T side of things, though no less alienated from society.

Trouble is brewing when a couple of guys from personnel arrive, trying to save money by firing a few heads. Everyone is on edge, except Peter, whose worries have recently disappeared since a visit to a hypnotist.

In the aftermath of the clinic visit, he suddenly becomes a self-aware, carefree soul who pays no heed to the wants and whiles of Lumbergh. Nor does he have any fear of asking the cute waitress(played here by Jennifer Aniston, how did they find the money to afford her??) out for lunch.

Of course, this production is not built on plot alone. The character driven piece is designed to get the viewers(hopefully real life slackers) to both root for and rage against familiar types they might recognise from their own cubicle partitioned gulags. It is to Gary Cole’s and to a lesser extent Steve Root’s eternal credit that they are so memorable.

The film itself is no ground breaker. It has the usual ahem…staples. Anti-social psychopathic men with soup stained shirts, easy living next-door neighbours behind paper thin suburban walls. As a critique on modern American working culture its themes are easily identifiable.

Production wise it looks and feels more like a one camera comedy you might see on Comedy Central. The colour grade is dull but yet carries the assured glean of daytime television. In a way, it’s ideal for these characters who know their limitations all too well.

The film itself ranks high in the all time Imdb lists, a cult classic that steadily become more iconic with each passing year. Directed by Mike Judge(he of Beavis and Butthead fame) it remains a fine addition to that most valued of genres, the slacker comedy.

One thought on “FILM OF THE WEEK: OFFICE SPACE”