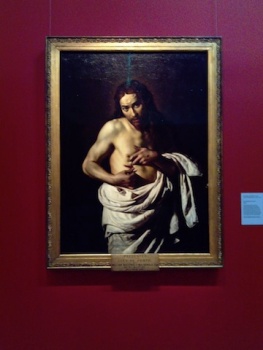 There is a lot to be said for going to an art museum. Especially on weekdays if you manage it. Unfortunately, times being as they are, there will be a strategically placed gift shop for you to negotiate. Once you have either ignored or surrendered to all those Da Vinci fridge magnet’s however, you’re into a new and magical world.

One exhibition that drew my attention recently was the Caravaggio display in National Gallery of Ireland, near Lincoln Place in Dublin. I had promised myself the past few weeks that I’d head in. So I decided to do so, albeit on the warmest day of the year thus far.

I was warned beforehand that it wouldn’t be wall to wall original work from the man himself, but rather a selection from those who studied under him from the early 17th century onwards.

The exhibit has been well promoted on the radio waves the past few weeks. There was one such documentary on Newstalk that is well worth catching up on. I learned among other things that our pal Caravaggio was a lot like our other pal Fyodor; he didn’t much like his landlords.

Moving onto the work itself. All in all, there’s about 30 pieces in the display. The artists hailed from Western Europe; France, Germany, Netherlands and of course Italy. All inspired by the style that made Caravaggio so familiar. The spotlight style, I like to call it.

From what I can discern there is a question of how he managed to attain this light. Legendary photographer David Hockney has stated he believes it was through the camera obscura, others aren’t so sure. What was clear to me in that collection was that Caravaggio definitely managed to get his models to stand for him longer than most; he was not known to use sketches as a reference.

All art is quite rightly subjective but for this scribe, you really can’t argue with realism. Detail is often derided as merely replicating what you see, that it lacks a personality all its own. What people might forget is that without Caravaggio’s innovation, this might never have become an argument.

His unique means of lighting his subjects have long since become standard, not only in fine art but also in modern film-making.

A strong, stark light casts itself on the subject, offering pin sharp detail wherever its beam lands. In turn, this can create wonderful atmosphere, depth and shadow. Unlike so much two-dimensional work that preceded him, one can only imagine the excitement of seeing such realistic depictions back then. 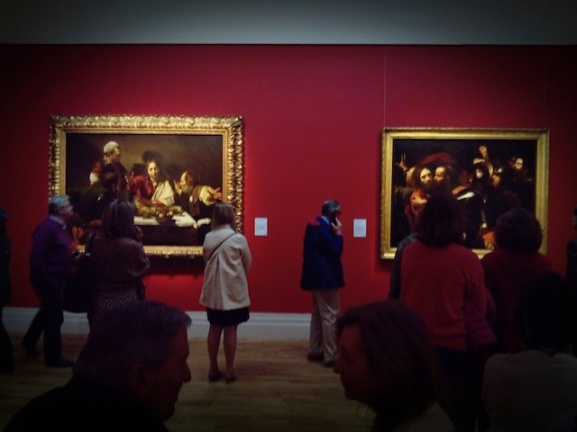 In his most famous work ‘The Taking of Christ’ the central character is brilliantly detailed. The angry tones of red warning everyone of impending doom. But what struck me with seeing both this and ‘The Supper at Emmaus’ up close was the attention paid to the co-stars(for want of a better description) This became really noticeable when compared to the other works on display.

That’s not to dismiss their paintings completely. I counted about 15 pieces that really grabbed my attention.

Out of those my favourites were

There were recurring themes in a lot of the work. The prevailing mood of the day seemed to be quite jovial with games of Dice documented a few times. There were also two very different retellings of a scene from Sodom, which were both shocking in their origin but only one was truly graphic.

I suppose a lot of these were painted because of society’s wants at the time. There was surely commissions from the Church to depict biblical scenes but many artists seem to be cowed by this responsibility, often being too reverential to the subject matter. Not so Caravaggio and a number of these younger prodigies. I can imagine depicting Jesus Christ in such a real and vulnerable state would have raised a lot of eyebrows back then. Caravaggio certainly wasn’t the first to depict him as such, but few if any managed to deliver such moments with the fury and intensity that he did.

As a layman and a guy walking in off the street I can’t say I know much about it but I know what I like. The gallery’s crimson walls are ideal for this collection. Some of them work better than others but for those that do, you’ll be left with these images painted into your psyche for days afterwards.

One thought on “Beyond Caravaggio”