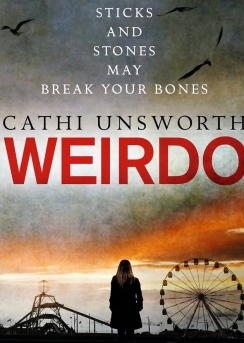 I don’t envy anybody who has to pick out a novel in the crime & thriller section these days. There seems to be an endless amount of options from various parts of the world and as well as a bottomless pit of writers, old and new vying for a reader’s attention.

What got me to read this? I had just finished the Ed McBain when I decided I wouldn’t mind continuing down the slang/noir route. The Guardian is fond of their ‘ten best’ lists and I saw Weirdo was the least expensive of her collection on Kindle so…

What great decisions are made by force.

Anyway, I made a start on it, not knowing what to expect really. I didn’t read up on Ms Unsworth beforehand and I’m kind of glad I didn’t. She is not a serial killer or anything. I just think that sometimes when you hear what a novelist used to do for a job it clouds how you judge their work.

Weirdo is a story based in the fictional town of Ernemouth, a sleepy seaside village in Norfolk. It follows two separate timelines chapter by chapter, with one section based in 2003/04 and the other in 1983/84. This is something I really like. Other writers have used alternative time periods to great effect. Nesbo, Faulks and of course Stephen King. It is a great way of giving even the smallest story more scope.

The noughties story sees a private detective by the name of Sean Ward arrive in the town. He has been given the job of resurrecting a cold case from the early 80s after new forensic evidence is found. Gradually he feels his way around the case by asking questions in a non-offensive way.

Ward is written in a very straightforward fashion. He is not a smart mouth nor cynical. Doesn’t go through whiskey or cigarettes like a 50s gumshoe. Respects women. In some respects, he could be considered boring but there is plenty of colour around him and I think making him so one dimensional really doesn’t do the story any harm.

The ‘Weirdo’ in question is a girl by the name of Corrine. Early in the story, we learn that she was charged with the murder of a school friend and locked up ever since, her mind long since diminished by high doses of sedatives.

That story unfolds quite neatly in the 2000s section. There are helpful journalists, overly helpful police, traumatised elderly folk with long memories, reluctant pillars of the community and Ward in the middle, trying to wrangle it all together, with only the editor of the local gazette to assist him.

What’s key all the way through the book is plot. It is by no means a masterful labyrinth of suspense but there is enough corruption, double crossing and revenge to keep those pages turning. Though the characters can be a bit clichéd at times, you really do want to get to the bottom of it all.

And how we get there is by going back. It is pretty clear reading the 80s sections, Unsworth enjoyed the trip down memory lane far more. There could even be a mixtape promotional tie-in if all the artists mentioned agreed to it. Either way, it is a simple and effective way to set mise en scene.

As the 80s story goes on we learn about Corrine, her friendships, family and future prospects. These parts are generally well written with occasional bursts of colloquialisms that don’t ever threaten to take over. The cast of characters is kept quite tight and though there are a few name and gender changes it’s not too hard to follow.

Another thread in this book is the use of voodoo.  The writer does not delve too far into this which might have been a mistake. Then again she might have felt it was going to alienate her regular readers so simply decided to get the basics right and leave it at that.There is also a mention of Captain Swing which might interest some budding British historians.

The town itself, though fictional is clearly based on a composite of seasonal holiday destinations. There are the funfairs and amusement arcades that close in winter, pubs with regular low-paid punters, hair salons doing occasional business and a seemingly unspoken agreement between police and the limited criminal output to keep any aggravation to a minimum.

The writer is not one for scrupulous detail though there are some very poetic descriptions of the weather all the way through.

I found the book to be very solid all round. Unsworth works very hard to satisfy her readers by taking the plot very seriously here. It is an ideal companion for journeys on the train to and from work.

All that said, I’m not particularly loyal to any writer and I don’t know if this one convinced me to purchase any more of her titles.