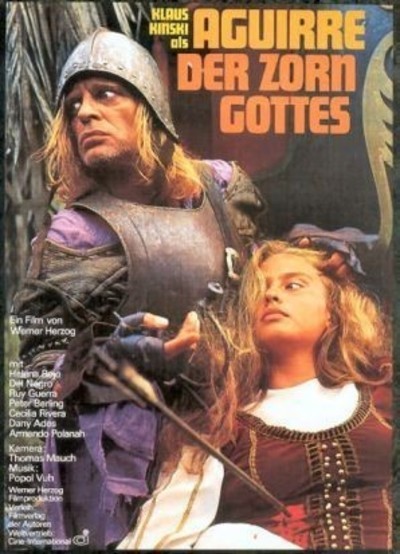 Spanish conquistadors speaking German going down the Amazon on rickety wooden barges, built by their slaves. Filmed on a stolen camera. It should be a mess but it’s far from it.

Klaus Kinski has gained much infamy in the years that have passed. One would assume it had plenty to do with his determination to stay in malevolent character all the way through the film’s production.

Here he plays Aguirre, who in a mission led by Pizarro want to get downstream. After struggling through some troubled waters Pizarro thinks better of it and wants to turn back and go in a different, easier direction. Aguirre believing his destiny is to find some mythical city of gold, declares a mutiny and in turn his support for a new de-facto Emperor.

As the local tribes battle both each other and Aguirre’s arrivals, long arrows fly towards them. Meanwhile everything happens on the barge. The animals they carry begin to get restless on the water, as do the people. As various people take sides and figure out where best to butter their bread, Aguirre stands not quite tall, but slightly bent over, seemingly impervious to the attacks coming from the shore.

I would have to watch this again to fully appreciate it and indeed get everything right. The first viewing was such a curiosity. I simply couldn’t figure out how they managed it. How they got through that amazing opening scene. How the equipment managed to stay safe. How they got the master tapes back to the editing room in Germany. How they didn’t all kill each other beforehand.

This is not a wanton bloodfest like say Cannibal Holocaust. But one must wonder how much was made up on the spot and again what was put upon the performers after they’d surely agreed to lesser demands of them.

It certainly doesn’t compare to the grandeur of Fitzcarraldo( another Werner/Klaus collaboration) in my opinion. With Aguirre, we are talking about a film with a similar ambition but a far inferior budget. But when you look at the facts and what they achieved, Aguirre wins out on force of will.

There are two main reasons this works. Herzog and Kinski. This was the first time they worked together despite a long term ‘friendship’. The former’s determination to see it through and refuse to be cowed by the challenges of the terrain. And of course Kinski and that deathly stare of his. His performance is so convincing. This other worldly presence determined to bend the will of the other characters to do his bidding.

I guarantee you, you’ll not see many like this.

Take a look at these!