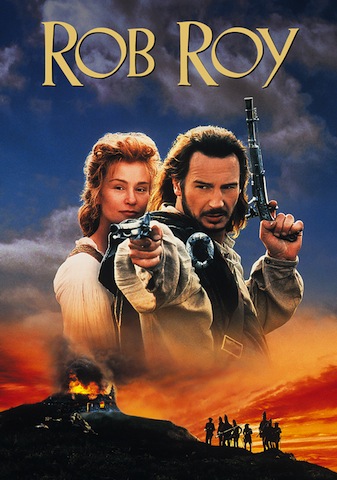 At least three of those are among my all time favourite actors. How did I let Rob Roy slip through my grasp for so long?

It is a film that doesn’t get many television appearances these days. The channels usually go for the louder Scottish rebel. You know, the one with the blue face paint and who can blow lightning bolts out of his arse? Anyway back to this.

Rob Roy tells the story of Robert McGregor(played here by a very fit and fresh-faced Neeson) a farmer, who retains the favour of the local landlords by keeping peasant thieves away from their valuable herds of cattle.

It is the year of our lord 1713 : Both he and some other loyal subjects enjoy a fairly peaceful and idyllic life amongst the Scottish Highlands, with morning dips in the lake and sing songs at a campfire by night. So far, so good.

MacGregor and his beautiful wife Mary(played by Jessica Lange with a very respectable accent) are generally seen as the leaders of the group, with future plans and business arrangements usually coming from their home.

MacGregor’s earlier fracas with the peasants is noted by the local landlords, with his fine judgement and cool head given due praise. Around this time MacGregor begins to see the value of a business focused mind. He wants his clan to pool their resources together and buy a herd of their own cattle, with a sizeable loan taken from Montrose(John Hurt)

Accompanying Montrose is a southern vagabond in the shape of Archibald ‘Archie’ Cunningham(Tim Roth)who has returned from a faraway land. His clothes indicate a man well travelled but his behaviour is anything but gentlemanly. Roth is perfect here as a diminutive but malevolent swordsman, seemingly willing to ravage his way around Scotland til something better comes along. He is a little like Redmond Barry, except far more vicious. It is his alliance with Killearn(Brian Cox) which suddenly brings disharmony to the province. Two men with barely a scruple between them. One violent, one more cerebral.

The plot here unfolds nicely. It is easy to transport this story from early 18th century Scotland to a more modern setting if needed. The idea of the little man with notions of self-improvement getting screwed by figures higher up the societal ladder is one that never goes out of fashion.

Something I get with these period dramas. A problem I suppose, are the character names. I don’t always remember them during or afterwards. These names in many cases have long since died out. Generations and the lineage of a strong moniker lost over time. Anyway the point is that when one character is on screen discussing another one who is off screen it is vital that name is different enough to make the character stand out but maybe easy enough to recall quickly. It is particularly important in a feature film where you don’t have the settling in period of a TV series, for example.

Another important thing that any budding screenwriter must do (and I feel I should follow my own lesson here) is that in a tightly knit machiavellian plot like this you must make sure all the main players have enough to do.

All the names listed initially have their moments. Perhaps Stoltz gets the dirtier end of the stick but it’s not a Marty McFly situation by any stretch. Montrose’s interplay with his rival, the Duke of Argyll is excellent. In a film where commerce is at the forefront it is important to always note that other great measure of the time; religious persuasion. In this case it is the Duke of Argyll who carries his Jacobite beliefs in silence.

Anyway getting back to the review. I really enjoyed this film. I was swept up in it. Immersed in the ‘bastardry’ of all the bastards involved. Killearn, in particular, is a horrid little man. As comfortable in feeling up chamber maids as he is gambling on a sword fight, it is clear that while he might not have travelled as far as many, he is frighteningly familiar with the local politics. Who is broke? Who is hoping to leave? Who wants to stay and improve their lot. It is a remarkably well-rounded character for what is a supporting role.

Of course then my beloved Jessica Lange. No way was she going to travel all the way to Scotland for a jolly up. Like so often in her career she pulls at threads and suddenly the light comes in every time she’s on screen. Her role here as den mother to Rob Roy’s household would probably not be described as stand-out. But it’s certainly memorable.

And then the big fella himself. Neeson. This film was released in 1995 remember. At this time Liam was three years past Schindler’s List, with the likes of Taken and the rest not even in his wildest dreams. We are talking a Neeson here in his absolute physical prime, with Bond and Bruce Wayne rumours circling the dirt sheets daily. This is arguably the best of him in a 1990s action role. Though to categorise it as such would be unjust.

Which maybe brings me to the real unsung star of this piece. Alan Sharp, a Scottish novelist is listed as screenwriter. His bibliography is well worth exploring. And for my money, it is pretty sad that all those juicy lines weren’t worthy of least a BAFTA or Oscar nomination.

Anyway, I implore you to watch it. You might be best not to wait for Film Four or ITV2 to screen it, maybe TV3 will come through at some point. But you are all resourceful people, you will find a way.